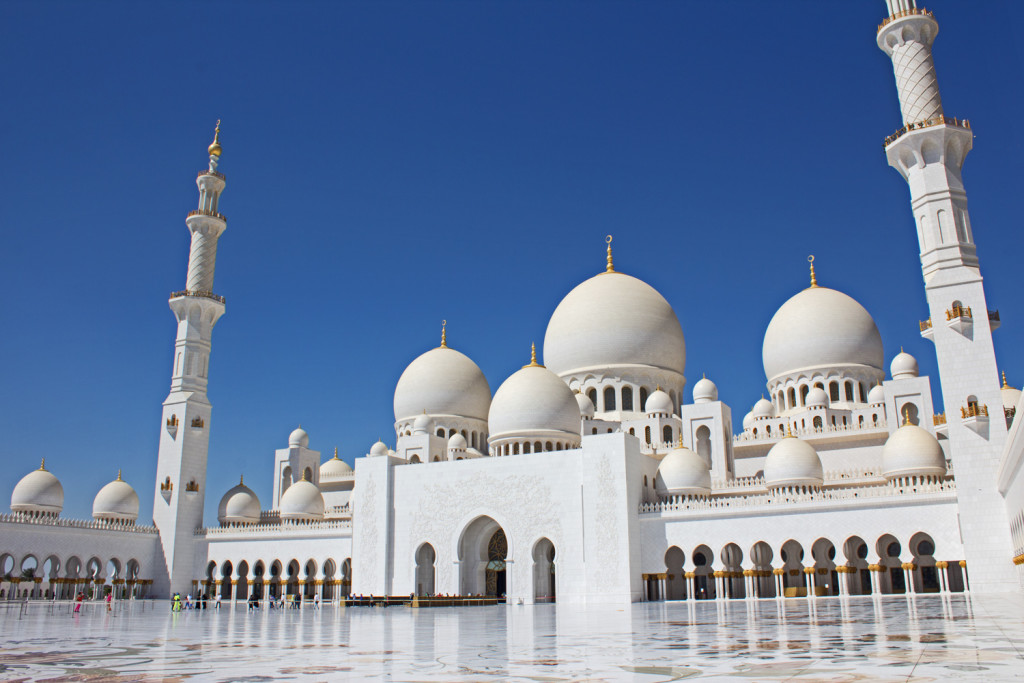 The spectacular Grand Mosque in Abu Dhabi combines the best of Islamic and world architecture and design.
Abu Dhabi’s Grand Mosque was the vision of Sheik Zayed bin Sultan Al Nahyan, who is regarded as the founding father of the United Arab Emirates. Today it is the third largest mosque in the world, and one of only two in the UAE which can be visited by non-Muslims.

In keeping with the cosmopolitan nature of the UAE, the Sheik Zayed Grand Mosque incorporates the best of traditional and contemporary design from around the world, and was built using materials and artisans from many countries. More than 3000 workers took part in the construction.

Planning of the mosque began in the late 1980s but the first cornerstone was not laid until 1996. During that time many refinements were made to the original design and consideration was given to the choice of location. It was finally built at the entrance to Abu Dhabi island, on a platform nine metres above ground level so as to be visible from far around.

Problems with financing and with contractors further delayed the construction and the building was finally completed in 2007. Work on the surrounding gardens is still underway.

Sheik Zayed died in 2004 and is buried in a mausoleum in the grounds of the mosque.

The mosque combines elements of Arabic, Moorish and Mughal architecture. The original design was Moroccan but Ottoman domes were incorporated, as well as design features from across the world. It includes over eighty domes and four minarets, and the arcades that surround the vast courtyard are lined by around a thousand columns. As is traditional in Moorish architecture, the mosque is surrounded by reflective pools.

The mosque, columns and courtyard are all fashioned from white marble and patterned with gold and semi-precious stones. The marble used in the building and the mosaics was brought in from 28 different countries, including India, Italy and China. Visitors should take time to look carefully at the floral pattern on the courtyard floor, supposedly the largest marble mosaic in the world, and at the intricate designs on the marble columns.

The opulence continues inside the main prayer hall. The floor is covered with a vast carpet of contemporary Iranian design. This is the world’s largest hand-knotted carpet, fashioned by 1200 artisans with over 2 million knots. Hanging from the ceiling are seven gold-plated chandeliers from Germany: the central chandelier is 10 metres high and weighs 9 tonnes! Continuing the international theme, the chandeliers include Austrian Swarowski crystals and Italian glasswork.

The Qibla wall, which faces towards Mecca, features the 99 names of Allah written in traditional Kufi calligraphy. This is one of three forms of Arabic calligraphy which are used throughout the building. Elsewhere in the mosque you can see a number of Turkish Iznik panels – highly decorated ceramic tiles of a type which are popular in religious buildings in Turkey.

Third largest mosque in the world

Everything about the mosque is vast. The site occupies a total area of 22,000 sq m and the courtyard around 17,000 sq m. The main prayer hall can accommodate 7,000 people but at busy times up to 40,000 worshippers can be packed into the mosque and courtyard. The carpet, courtyard mosaic and central chandelier all make it into the record books. And the total cost of construction was a mouthwatering 2 billion dirhams (US$545m).

The best way to get to the mosque is by taxi and there are always plenty of taxis waiting outside. However if you are leaving at a time when the mosque is busy (perhaps when a guided tour has finished) you may prefer to pre-book a taxi.

Non-Muslims are welcome but are asked not to touch the copies of the Koran that are stacked up in the prayer halls. Dress should be modest and women are requested to wear an abaya (these can be borrowed free of charge from a desk by the entrance). All visitors must remove their shoes before entering the mosque. Photography is allowed but visitors are asked not to take pictures of Sheik Zayed’s mausoleum.

The mosque is open from 9 am to 10 pm and entrance is free. Guided tours are available from Sunday to Thursday at 10 am, 11 am and 5 pm (there are also tours on Fridays and Saturdays – check the website for times). Tours take approximately 45 minutes and there is no charge. There is no need to pre-book unless you are in a large group.

However visitors may find that the mosque is best appreciated outside of the tour times, when the building is almost deserted and they can experience the full harmony and splendour of Sheik Zayed’s legacy.