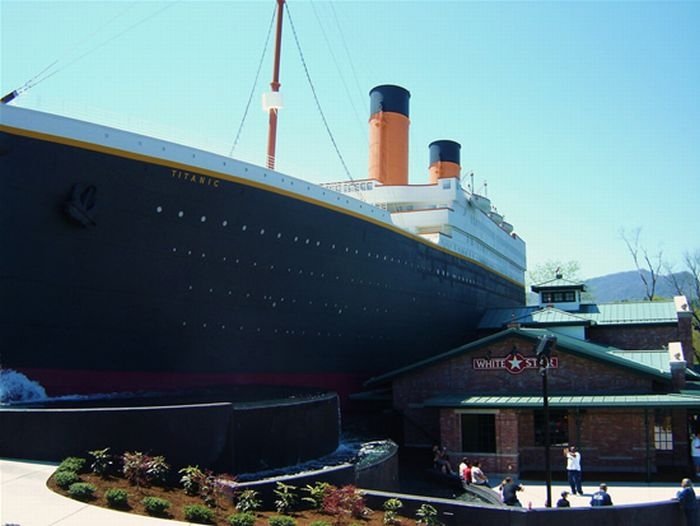 Rising 100 feet above the Parkway in Pigeon Forge, Tennessee is a familiar looking structure that seems ridiculously out of place. First, the structure looks like cruise ship, which is not something seen every day in a land-locked state. Second, the ship bears a striking resemblance to one that never reached the American shoreline: the RMS Titanic.

The outer structure of the new museum is unlike any other in the Smoky Mountain area; it is a replica of the front half of the original ship, but half the original size. According to the preview center, the structure is made from concrete and steel, and has a construction cost of $25 million. Its smoke stacks rise high above the surrounding structures in Pigeon Forge, with an orange color nearly impossible to overlook.

Surrounding the ship-shaped façade will be a fountain designed to give the effect that the boat is moving through water. Of course, no Titanic replica would be complete without an imitation iceberg, so expect to see one rise above the ship on the starboard side.

Guests will start their tour by purchasing a boarding pass with a real Titanic passenger’s name on it. The tour guides tell visitors a bit about the person’s boarding pass they receive, but visitors will not learn the fate of the passenger until the end of the tour. For younger visitors, care is taken to ensure they receive a survivor’s boarding pass.

With 30,000 square feet of exhibit space, the Titanic museum will feature 90-minutes and three floors worth of interactive displays. The centerpiece of the displays is the full-scale replica of the Grand Staircase, made from solid oak with hand-carved cherubs. The replica Grand Staircase features a skylight identical to the one on the ill-fated ship.

Interactive exhibits will allow visitors to feel water the same temperature of the Atlantic on the night the Titanic hit the iceberg, control a simulated underwater exploration like those used to recover pieces from the Titanic, send an SOS signal, sit in lifeboats with actors portraying survivors, and touch the frozen surface of a simulated iceberg. Guests will also tour a replica first class suite, as well as a third class cabin.

Absent from the exhibits will be any items from the original Titanic. However, there are several galleries featuring antiques from the era. Memorabilia and collectibles from the 1997 movie with Leonardo Dicaprio and Kate Winslet are available in the gift shop, including the infamous Heart of the Ocean necklace.

First Class Events Aboard the Titanic

The Titanic museum intends to offer event services within six months of their grand opening, including princess teas for little girls, birthday parties, weddings, dinner parties and most any other special event. Couples can exchange wedding vows on the Grand Staircase or by the fountain outside the museum for prices starting at $700.

Size Does Matter in Pigeon Forge

With an unmistakable outer structure, the mystique that surrounds the sunken ship, and a level of interactivity sure to capture even the youngest visitor’s attention, Pigeon Forge’s Titanic museum is sure to find success in the Smokies. The 90-minute tour could be a leisurely end to a day spent hiking in the mountains or water tubing down one of the many rivers. While at first glance the museum seems out of place against the backdrop of an area best known for bluegrass music and moonshine stills, it fits perfectly with attractions such as its Miracle Theatre and WonderWorks neighbors. Pigeon Forge aims to have something for everyone, and the Titanic museum works well with that goal.